Ajanta and Ellora Caves in Auranagabad

Aurangabad city in Maharashtra is famous for the historical relics and monuments situated in its vicinity especially the renowned Ajanta and Ellora caves. Ajanta caves are a splendid nexus of 30 Buddhist rock cut caves located 100 kilometers from Aurangabad established between 2nd Century BCE – 480/650 CE. On the other hand Ellora caves established between 5th Century and 10th Century AD are fantastic specimen of 34 rock formations located 30 kilometers from Aurangabad. Both have been declared UNESCO World Heritage Site. The caves are stupendous creations of yesteryear and the architecture is a sight to behold inside the caves. The caves portray the melee of three religions namely Hinduism, Jainism and Buddhism.

From the 30 rock cut caves in Ajanta, caves 9,10,19,26 and 29 are Chaitya Grihas while the other caves are mainly Buddhist monasteries. With Buddhist sculptures, paintings and figures, Buddhist art and architecture, Jataka tales and portrayals, Ajanta caves are a captivating marvel located near Jalgaon.

Ajanta caves in comparison covered in dense foliage were excavated in 1819 AD by a British officer on a hunting spree and portray stories from Jataka, Boddhisatva and Lord Buddha’s life and teachings. Magnificent architectural edifices the caves were constructed in the hills away from the hustle bustle to allow Buddhist monks to pray in alienation. Influence of Greek, Roman and Chinese architecture and craftsmanship can be witnessed in the Ajanta caves dating back to reign of King Kanishka and Hinayana sect of Buddhism era.

Both the monuments are preserved under Protection of Monuments by the Archaeological Survey of India. Ajanta is a unique piece of art as it dates back to the nascent stage of Indian wall painting. Ajanta Caves are intriguing because both early depictions of Buddha in the form of Stupas and later sculpture is found in the caves. 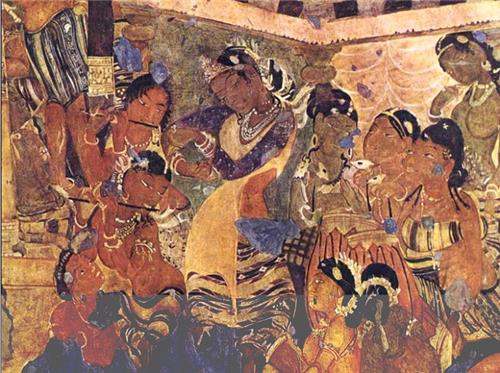 Ajanta caves in comparison were excavated in 1819 AD narrates stories about Jataka, Boddhisatva and Lord Buddha. Magnificent architectural edifices the caves were constructed in the hills away from the hustle bustle to allow Buddhist monks to pray in alienation. Influence of Greek, Roman and Chinese architecture and craftsmanship can be witnessed in the Ajanta caves dating back to reign of King Kanishka and Hinayana sect of Buddhism era.

Both the monuments are preserved under Protection of Monuments by the Archaeological Survey of India. Ajanta stressed on teachings; hence segmented into different caves for educational activity, living and worship. Monks did reside here in the 5th Century and it has been chronicled by Chinese scholar Xuanzang in his traveling biography written in 7th Century. The caves in Ajanta spans over two dynasties and time period namely Satavahana and Vakataka.

Ellora caves are believed to have been constructed by Chalukya, Kalachuri and Rastrakuta dynasty and total count is 34.  Ellora caves have got its name from Elapura (Kannada language) also goes by the name of Verula / Elura with viharas and mathas constructed between 5th Century and 10th Century. Ellora caves created out of Charanandri Hills are divided into two halves; the caves numbered 1-12 are Buddhist monasteries while the 17 caves numbered 13-29 are Hindu temples and finally 5 caves numbered 30-34 are Jain shrines.

Amongst these cave formations cave no. 29 known as Dhumar Lena and Kailash Temple in cave no. 16 dedicated to Lord Shiva carved out of a single piece of rock are marvelous creations.  The temple is a two tiered structure with figurines and deities; Nandi (Shiva’s Bull) Ravana depicts architecture at its best. Since Ellora is situated in the Western Ghats range, it was carved out of volcanic rocks which architects found easy to carve their sculptures out of basalt. 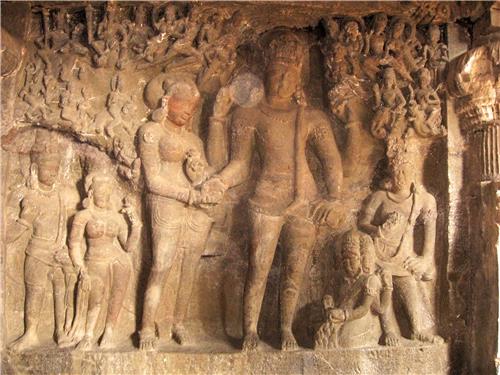 The cave shows a confluence of Shiva and Vaishnavite cult. Cave no. 15 in Ellora is popularly called Dashavatar Caves is also a two storey structure and believed to be a Buddhist monastery actually and also contains statues of 10 avatars or manifestations of Lord Vishnu. The caves and inscriptions along with figurines, sculptures show the harmony between three cultures Hinduism, Buddhism and Jainism. Nilkantha Caves, Ravan ki Khai, Gopilena and Kumbharvada are the Hindu caves in Ellora while Indra Sabha, Chota Kailash are some of the Jain caves belonging to the Digambara sect.

In fact inscriptions and lettering on the walls of Ellora caves were established between 5th and 16th Century especially an inscription of Rastrakuta Dantidurga engraved in cave no.15 describing his victory. Interestingly, Ellora Caves always existed and not excavated like Ajanta Caves. Arab geographer Al-Masudi visited Ellora in 10th Century AD while Firishta, Sultan Hasan Gangu Bahmani, Niccolao Manucci, Seely, Thevenot and Charles Warre Malet made visits to Ellora over centuries.

How to Reach – Aurangabad Railway Station is the closest to Mumbai and Pune and tourists can also detrain at Jalgaon station and hire private cabs to reach Ajanta and Ellora. State transport buses and private cabs also ply regularly from Aurangabad to Ellora and Ajanta while Aurangabad is well connected via its highway with cities like Jaipur, Udaipur, Indore, Delhi and Bijapur.

Explore more about Tourism in Aurangabad